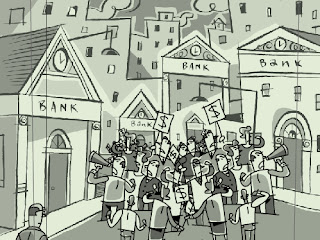 Anyhoot, here are the proposed rules, in a nutshell (they will not be made final until consumer comments are reviewed):

1. Do not give unaffordable loans. Instead of measuring a borrower’s ability to repay based on the lowball sub-prime ARM introductory rate, measure it against the reset rate. In other words, stop the sucker loans.

2. Restrict “stated income” or “no income verification loans. These “liar” loans lead to borrowers taking loans they never should have taken in the first place. These were great for lenders and mortgage brokers because it gave them an out– “It ain’t our fault, the guy said he made a million bucks. It’s not our obligation to check it out. Who thinks people will lie to get money?”

3. Eliminate or limit prepayment penalties. It does not take much to figure out that steep penalties for paying off a loan early would limit consumers’ refinancing options. Hmm… you don’t pay back the bank, they’re unhappy; you pay them back early, they’re still unhappy. You just can’t please some people.

4. Require disclosure of broker incentives. Wow. You mean borrowers would know just how much the mortgage broker was being paid? These brokers are gonna have a heck of time explaining yield spread premiums.

5. Prohibit coercion of appraisers. You mean appraisers allow themselves to be coerced? Maybe appraisers need to tell folks “Hey, I need my job so I’m giving the bank this appraisal number, but just between us, the appraisal I’d like to send them is this.”

6. Require better disclosure. Oh no. More forms that no one will read, drafted by lawyers who still think they should be charging by the word (some of them may even throw in some legalese, or latin, you know, to show they’re smarter and entitled to higher fees)

Maybe those armchair anarchists are right. Abolish government and all these silly laws. Let the consumer figure it out— or get what’s coming to them.

If it were up to us, there would be only one rule: Is this a loan you would give to your mother?