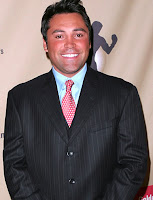 De La Hoya and Mayor De Witt took the lead in the groundbreaking by operating a giant excavator to initiate the site grading process. Site development started immediately after the ceremony and first homes are expected to be completed by March 2009. This is the first large scale planned community in South Gate since 1990.

Tierra del Rey, as the community is called, will be comprised of 107 for-sale townhomes on five acres located at Firestone Boulevard and Calden Avenue. Designed for working families, the homes will range from 1200 to 1600 square feet, and contain two and three bedrooms and up to three and one-half baths. The gated community will offer extensive landscaping and family amenities including two pocket parks with barbecues and sun shelters. Many of the homes will offer views of the downtown Los Angeles skyline.

“Our goal is to provide new housing for current residents of South Gate and to offer an opportunity for young people to purchase homes near their families and become residents of the community where they grew up,” said Scott.

De La Hoya concurred, noting, “Tierra del Rey realizes our vision for urban redevelopment that supports the dreams and aspirations of the people who live in under served communities like South Gate.”

“This is the first new housing community in South Gate in almost 20 years and we are pleased to have these prominent investors show such a high level of faith in our city,” said Mayor De Witt. “With the expansion of the East Los Angeles College campus next door, this block will be a great source of pride for our citizens and a vibrant addition to this neighborhood.”

“We see many burgeoning urban markets completely overlooked by other housing providers,” said Long. “We are fortunate to have a team of investors and key executives with long term commitment who share Golden Boy Partners’ vision of creating affordable homes and community-serving retail for today’s urban families.”

“Despite the substantial slow down in the suburban housing markets, we strongly believe there is a continued shortage of urban housing alternatives for working families in Los Angeles and Orange Counties, and are focusing our initial efforts on developing housing for that deserving demographic,” pointed out Scott. “By providing housing for working families, at the same time we will be revitalizing many of the Southland’s older, established urban communities.”

Golden Boy Partners, formed in April 2005, focuses on underserved Southern California urban neighborhoods, primarily Latino, to address the escalating demand for safe quality housing, retail and entertainment options, and business and job creation as well as to revitalize these communities and their tax base. At the same time, founders De La Hoya and Long plan to foster a number of entrepreneurial businesses under its banner as well as reaching out to entrepreneurs in communities where it participates.

“Golden Boy Partners is not just about real estate development. It is about building communities and changing lives,” concluded De La Hoya.