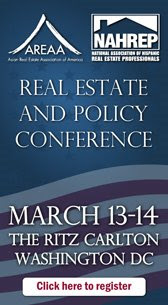 Government action addressing homeownership preservation and affordability issues will shape the future of housing in America for generations to come. Much of the responsibility to reestablish the American Dream of homeownership rests on the shoulders of the Federal Housing Finance Agency and its Director, James Lockhart.
Don’t miss your opportunity to hear from the FHFA director, who stands to make arguably the most influential housing-related decisions in American history. Director Lockhart will be discussing the future of the GSEs and plans to curb foreclosure at the AREAA/NAHREP Real Estate and Policy Conference on the afternoon of Friday, March 13th prior to a town hall discussion on loss mitigation.
James B. Lockhart III, is the Director (CEO) and Chairman of the Oversight Board of the Federal Housing Finance Agency, regulator of Fannie Mae, Freddie Mac and the 12 Federal Home Loan Banks. He assumed that position with the signing of the Housing and Economic Recovery Act on July 30, 2008. He was the Director of OFHEO, which is now part of FHFA.
He was nominated by President Bush to that position and confirmed by the Senate in June 2006.From 2002 to 2006, Mr. Lockhart served as Deputy Commissioner and Chief Operating Officer of the Social Security Administration and as Secretary to the Social Security Board of Trustees. He was a member of President Bush’s Management Council and its Executive Committee. Lockhart served in the previous Bush Administration as Executive Director (CEO) of the Pension Benefit Guaranty Corporation (PBGC) from 1989 until 1993.
To read more, visit fhfa.gov
To Register For the Conference go http://www.areaa.org/convention/
at February 26, 2009