U.S. Hispanics will drive growth in U.S. housing demand due to their population size, age and greater propensity to be married with children, according to a new report issued by the National Association of Hispanic Real Estate Professionals (NAHREP).

The report, "The State of Hispanic Homeownership," predicts that this demographic will drive demand for condominiums, smaller starter homes and first trade-up homes in the next 15 years. NAHREP adds that these demographics will also represent a "rapidly growing segment of the middle and middle-upper markets for housing."

NAHREP notes that Hispanics are the largest minority group in the nation and represent a significant portion of the 26- to 46-year old age group that are involved in most home sales.

"The Latin boom has been forecasted for years, but we are now seeing the front edge of it," says Carmen Mercado, president of the NAHREP. "It has the potential to help the nation's housing system get back on track if we can create a safe credit environment for new buyers to get into the market."

Mercado adds that it is crucial for housing policy to focus on encouraging affordable housing. "In the climate of crisis, we must resist over-reaching with regulations that make homeownership more expensive for millions of responsible consumers who have the buying power to revitalize our fragile housing market," she says.

Signs of a Real Estate Recovery?

The number of home owners who were put on notice for defaulting on their mortgage payments dropped last month to the lowest level since 2006, RealtyTrac reports.

Meanwhile, foreclosure filings for the eighth straight month also were down as filings fell 33 percent in May compared to a year earlier and 2 percent month-over-month. Also, lenders took back fewer homes in May, the second straight month of declines. And bank repossessions were down in May too — down nearly 30 percent over the last 12 months.

Is this a sign of a recovery in real estate, which has been bogged down by a high number of foreclosures over the last several years?

Experts are still cautious. Lingering delays in banks’ foreclosure process may be the culprit for the declining numbers, they say, and not an overall improving picture of the number of home owners facing foreclosure.

"Foreclosure processing delays continue to mask the true face of the foreclosure situation," says James Saccacio, the CEO of RealtyTrac. "Lenders are somewhat unevenly pushing batches of bad loans through foreclosure as they overhaul their paperwork and documentation procedures."

Meeting with Latino Leaders Across the U.S.

Director Mayorkas joined Chicago area business leaders As I travel across the country to meet with various higher education organizations, I have also had the opportunity to meet with Latino community leaders to share with them the Administration’s initiatives and to hear about their concerns and accomplishments. I have been struck by their dedication to their communities, their commitment to our country, and their determination to provide a better future for their children. The President’s 2020 education goal is deeply resonant with them and with the communities that they serve.

In a suburb of San Diego, Gary and Kathleen Acosta graciously opened their home to me and about a dozen colleagues and friends from the real estate industry, the arts, and academia so I could share with them the President’s agenda for the Hispanic community. Gary is an officer of the National Association of Hispanic Real Estate Professionals, and through his leadership, that organization has embraced improving the educational level of the Latino community as one of its goals. The group was keenly interested Read More Here!
at June 13, 2011 No comments:

RealEstateLatino.com (REL) celebrates Homeownership Month by launching “Path to Sustainable Latino Homeownership Sweepstakes” nationwide. Over the years REL has become a trusted online resource to educate the Latino community about the process of homeownership. REL is expanding its educational efforts by providing realtors who embrace our core value of “Impeccable Ethical Behavior” with tools to help inform their local communities.

REL, one of the most trusted online real estate destinations for Spanish speaking consumers in the US, kicks off June’s Homeownership Month today launching “Path to Sustainable Latino Homeownership Sweepstakes”. This promotion will run from June 1st through August 30th and will be open to all real estate sales associates and brokers regardless of their company affiliations and cultural background. Three lucky agents will be selected by September 15th.

REL understands that under current market conditions many agents will face challenges if they decide to incorporate a Spanish branded website in their business plan. By entering REL’s “Path to Sustainable Latino Homeownership Sweepstakes”, real estate professionals get a chance to win a free website and a complete REL marketing package that can help increase their business in the local Latino market.

A custom-made website includes all the tools an agent will need to ignite his or her local online market. The agent website features real estate education articles and local resources that along with lead capturing forms on every page will ensure a successful lead-capturing strategy. “Need extra online exposure? You got it,” says Bill Arce, founder of REL. The winners will also receive a full year membership with RealEstateLatino.com. The certified membership provides real estate professionals an innovative online marketplace en Español where agents can list their properties for sale, promote their bilingual services, and receive phone-verified real estate leads. 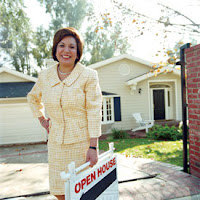 Juana Castillo Quintanilla paid $3,500 to a real estate broker who promised to help her strike a deal with her bank to lower her monthly payments. The Latina, who faces imminent eviction, says he didn’t deliver. He refused to return her money, so last Thursday she went to his office with about a dozen other angry homeowners to demand a refund.

“Christopher Lim, shame on you,” the homeowners yelled, as they poured onto the 27th floor of a high-rise in the mid-Wilshire district of Los Angeles, where the agent rents an office.
Hearing their shouts, Lim, dressed in a tidy gray suit, emerged from the conference room. Upon seeing video cameras, he shielded his face with a stack of papers, and turned and bolted down a corridor of identical office doors.

The homeowners continued to shout, “refund now,” as they chased after him. They lost sight of him, and believed that Lim hid in his office, before slipping out through the emergency exit when the hallway was clear.

“He’s not done a thing to this day,” Quintanilla said through a translator, adding she’s disappointed he “got away.” The Latina says she hired Lim after hearing an ad for his company, Neighborhood Credit Solutions, on Spanish-language radio. In the recession, work has slowed for her husband, a gardener, and the family’s income shrunk. Quintanilla says Lim promised to “fight” for her to stave off foreclosure, but that only involved submitting one loan modification application, which resulted in slightly lower payments that didn’t improve her situation.

But, Lim maintains that Quintanilla is just dissatisfied with the terms of the bank’s modification offer, which is out of his control.
“I’m not a bad person,” he said during a phone interview. There’s so much heat on my business. If they set this [confrontation] up on anybody, they could have looked like a bad person.”


For real estate tips and advice, visit www.RealEstateLatino.com
at June 04, 2011 No comments: